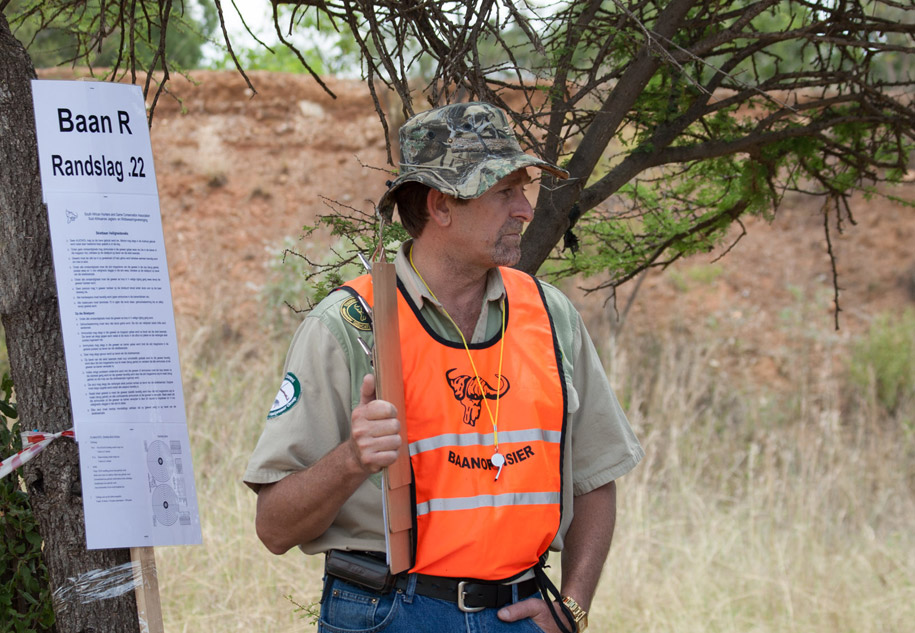 One of SAHGCA's most important practical activities is to create opportunities where members can develop and improve their shooting skills and practise to use their firearms with knowledge and confidence, whether they are on the shooting range or when hunting.

The purpose of SAHGCA's shooting exercises

The purpose of SAHGCA's shooting exercises for hunters is to ensure they succeed with a one shot, killing shot, approach when hunting. A responsible hunter must know the limitations of his shooting skills. It is only through experience and regular practice that he is able to act responsibly and use his common sense when hunting.

SAHGCA's shooting exercises have been developed to simulate different hunting conditions and different animals. These exercises aim to transfer the following knowledge and skills to hunters:

Read more about Shooting Exercises and branches for information about shooting days.

In 2012, an Inter Branch Challenge Team Shoot Competition was added to the Regional Shooting Competitions. Teams of five shottists each compete in the Warthog and Impala shooting exercises at regional level. This competition is not intended for top shottists and they may not participate. The new Challenge series is aimed, creating more participation and to involve shottists who do not have the right equipment and abilities to compete at national levels, but who can participate as part of a team over shorter distances at regional level. During 2013, 52 teams (260 shottists) participated in competitions compared to 17 teams (85 shottists) in 2012. This is an increase of 206% in participation.

SAHGCA offers three major shooting competitions at national level, of which the first is the Most Versatile Shot Competition that is annually held in February and any SAHGCA member can participate. This competition comprises seven different shooting exercises, including shotgun, hunting rifle, heavy calibre, 22 Rimfire rifle and hunting handgun and are aimed at the shooters who can participate with a variety of firearms. The rules of this competition are amended every year and published prior to the competition.

The national Inter Branch Team Shooting Competition is held in August every year when the Top 30 teams, based on the current year's regional results, are invited to participate to determine the Champion Team of the Association.

SA Hunters are busy developing a category for disabled shooters where they can participate in shooting exercises. The first Most Versatile Shooting competition was hosted by the Sandrivier-58 Branch at Welkom during June 2014 in which 19
disabled shooters participated. Disabled shooters interested to get involved are invited to contact SA Hunters national offices or go to disabled hunters on the website.