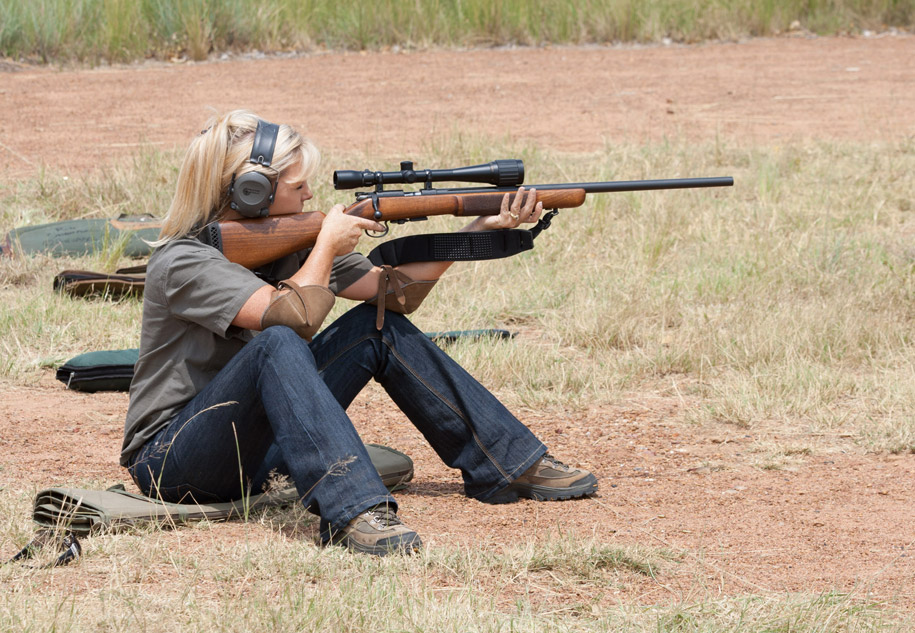 The hunter is afforded the privilege to kill an animal when hunting! WOW!!, Do we realise the enormity of this privilege and the attendant responsibility? The moment a hunter takes aim at an animal for that very important “first shot”, there is a very big responsibility on him/her to ensure a quick death for his prey, with the first shot! A hunter not taking this responsibility seriously, should reflect on his role as “modern hunter” and consider the following quotation from the code of conduct of the SA Hunters and Game Conservation Association:

The exact placement of the shot is determined by two important factors:

Every year a large number of game are wounded because of poor shot placement that could have been prevented. A lack of practical shooting skills amongst hunters is often the reason for wounded animals, causing unnecessary suffering.

Some hunters are under the mistaken impression that shooting a couple of rounds at the shooting range from a comfortable position over a shooting bench is sufficient preparation for a hunt. A couple of good groupings on the target only mean that the combination of rifle/telescope/ammunition is accurate. It is no indication of the hunter’s practical shooting skills in the hunting field! The real test for this is a hunter capable of killing an animal cleanly with his first shot under hunting conditions and for this the hunter must be well prepared.

Take the example of a hunter preparing himself to hunt a kudu in the bushveld. From previous experience he know that the heart/ lungs is the largest vital area and he ensures that he, know where to aim from different angles to be able to hit these vital organs. He fire a couple of shots on the shooting range to ensure that his ammunition (with bullets suitable for the hunting a big animal, such as a kudu) shoots accurately from his rifle. Prior to the hunt he fire a few shots on the shooting range at the farm to ensure that his rifle/telescope combination didn’t get “knocked out” during the drive on the dirt roads to the farm. These shots were fired from a dead rest to neutralise any mistakes by the hunter – the aim of this exercise is to test the equipment.

The big moment arrives and he is aiming through the telescope at a large kudu bull. An acute case of “bokkoors” causes him to tremble so much that he, in spite of the short distance can’t keep his rifle steady on the vital area. The kudu is still unaware of him but the hunter knows the wind may change at any time and give him away. He stealthily moves to the closest tree and chooses the first available branch on which he could take a dead rest, for a sure shot. He rests his rifle’s barrel on the branch and notice that the kudu is starting to become uneasy. Although he is standing in a slightly awkward position, he decides to shoot quickly. At the shot the kudu falls down on the spot! The hunter didn’t expect that. An animal shot in the heart/lung area doesn’t react this way. He moves closer and to his dismay the kudu started struggling to get up and before the hunter can give it a finishing shot, it disappears into the bush.

This hunter was “well-prepared”, his equipment was prepared properly and he used a rest to get a more stable shooting position. Still, he wounded the kudu! A Possible explanation is the fatal (and fairly common) mistake he made, to rest the barrel of his gun on the branch. It changed the harmonious movement of the barrel while the bullet is moving through it and consequently the impact point of the bullet was different. The second possible mistake was to adopt an uncomfortable shooting position. The consequence was probably a shot that was placed too high on the shoulder of the animal touching the spinal column but not damaging it paralysing the animal temporarily. This is a regular occurrence with larger animals and frequently these animals are not found, even after thorough tracking and follow-up. Shooting mistakes such as these are the consequence of a lack of practical shooting skills.

Responsible hunters should realize their limitations regarding practical shooting skills when hunting and that this can only be addressed with regular shooting exercise from field positions and the use of common sense and good judgement when hunting. The shooting activities of the branches of the South African Hunters and Game Conservation Association (SAHGCA) give everybody the opportunity to work on their practical shooting skills on the shooting range. A variety of shooting exercises have been developed for this purpose and has been designed to imitate hunting conditions under different circumstances and different shooting positions. The emphasis on the different shooting positions is to teach hunters to quickly and instinctively adopt a comfortable and stable position for that successful first shot.

Why the emphasis on the “first shot”? The hunter has control and decides when he will fire that all important first shot. He can wait until the animal is standing still, decide on his aiming point and take a stable shooting position from a rest of his choice to ensure a well-placed shot.

If the first shot is placed poorly, the hunter loses control over the situation. The conditions under which a follow-up shot or shots have to be fired at a wounded animal is normally much more difficult. The animal knows about the hunter, are skittish and a quick shot must often be fired from an uncomfortable shooting position at a moving target. “Bokkoors” can again be significant problem. The hunter will already imagine paying for a wounded animal that got away – conditions, not conducive to accurate shot placement for the follow-up shot!

Personal experience obtained during hunting expeditions on plains and mountain game taught me how important practical shooting skills really are. I prefer to hunt on foot, with my rifle in the one hand and shooting sticks in the other – without exception! Long shots are usually in the order of the day in these hunting environments, although close-up shots are not to be ruled out. Proper support for the rifle with the purpose of accurate shot placement, is of cardinal importance. I usually shoot from a prone or sitting position with the aid of the shooting sticks. Regular practice (on the shooting range as well as in the hunting field) ensures that field shooting at an animal, becomes progressively instinctive. One of the most important skills that any responsible hunter can acquire is the development of a sense of your own limitations – when to shoot at an animal and when not to shoot, depending on the circumstances. The development of this ability should continue for the rest of your life!

I use a 1,8 metre single shooting stick for bushveld hunting. With the aid of this shooting stick, accurate shot placement from sitting, standing or kneeling positions are much more stable. In the past I would not shoot the same shots with the same degree of confidence as I do now – even though 90% of shots in the bushveld by myself were closer than 70 metres! When hunting in the bushveld a tree trunk or branch can arguably be found close by, but the advantage of a shooting stick is that you can practice with it until you use it instinctively for a trusty, stable and comfortable shooting position.

When hunting it is sometimes necessary to shoot quickly, usually over a short distance, from the offhand standing position without a shooting stick or other aid. This is a very difficult and high risk shot to make, and takes a lot of practice. On the shooting range I have frequently seen how experienced shooters fail to place an accurate shot from this position. The probability of a wounding shot from an unaided position is high, rather use a shooting stick whenever possible. It takes one or two seconds longer to get into position and the animal may escape, but it is worth it, to rather wait for and fire a well placed shot.

The single stick is handy in the bush because it is light and can be placed in position easier, quicker and more quietly than a bi- or tripod. Shooting distances are usually short and little advantage is gained by the slightly better stability of a bi- or tripod.

Hunters who reload their own ammunition and do load development must use a shooting bench and proper bench rest shooting techniques to eliminate the human factor as far as possible when testing equipment and ammunition. However, all hunters should practice their practical shooting skills as often as possible. The use of air or “rim fire” rifles for this is cheap and good practice. It is worth taking part in the variety of shooting exercises offered by the branches of SAHGCA. It gives one the opportunity to repeatedly practice shooting techniques such as sight picture, proper breathing, smooth trigger squeeze and the follow through of the shot. You will also get acquainted with the bullet path and this enables you to know how much you have to compensate for the rise and fall of the bullet over different distances. Some of the shooting aids and techniques used on shooting ranges are not always suited for hunting, keep it as simple as possible and practice frequently. Information regarding the shooting exercises of SAHGCA are available at the branches of the Association or at the national office.

Improve your practical shooting skills by: 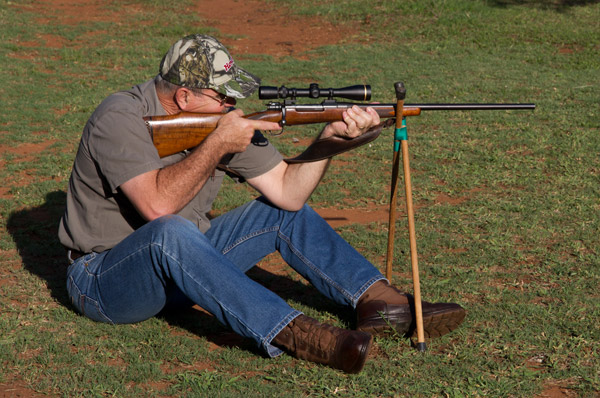 The sitting position with short shooting sticks from which one can shoot accurately for up to 200 metres. Both elbows are on the knees for better stability. 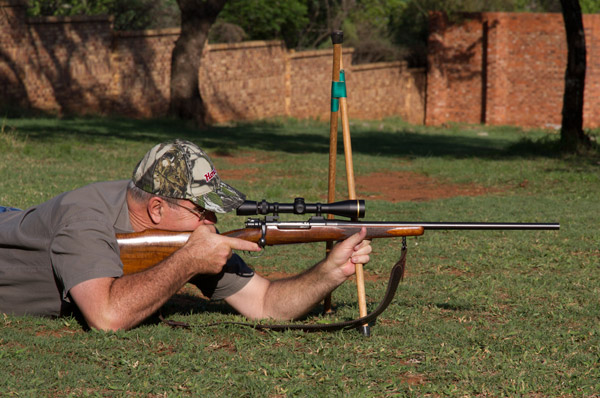 The prone  position with short shooting sticks from which one can shoot accurately for up to 300 metres; 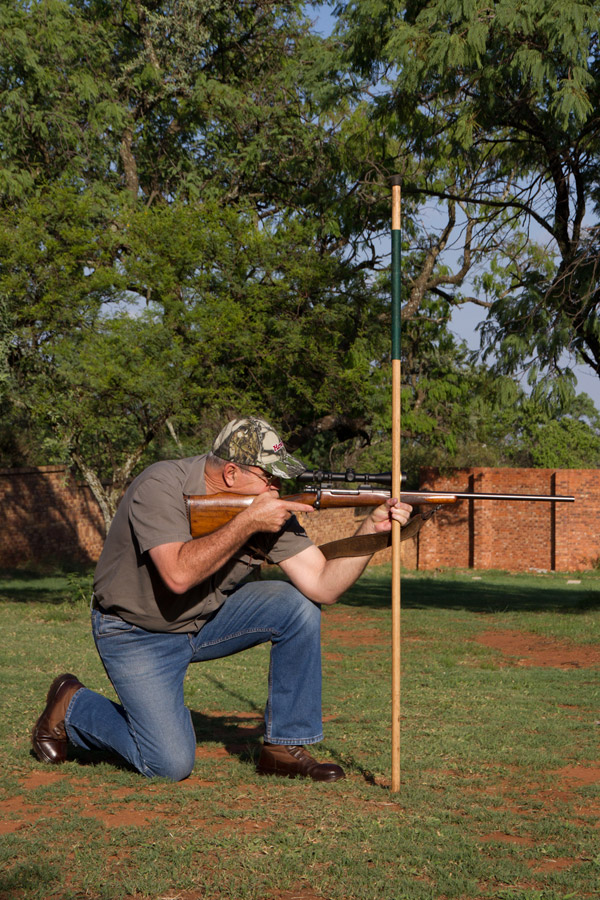 The kneeling position with  a single shooting stick for use over short distances in the bushveld. 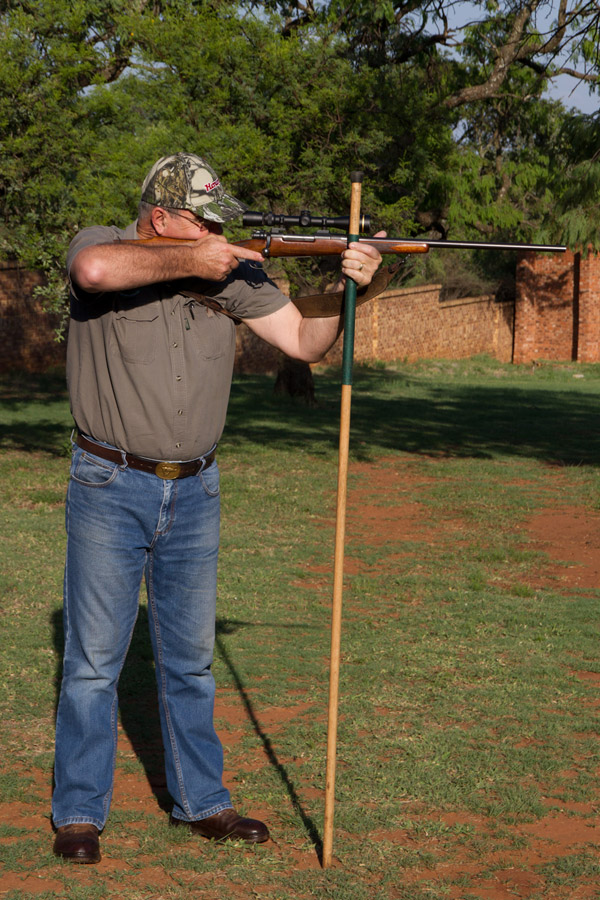 The standing position with a single shooting stick for bushveld hunting – the rifle sling ensures even better stability.