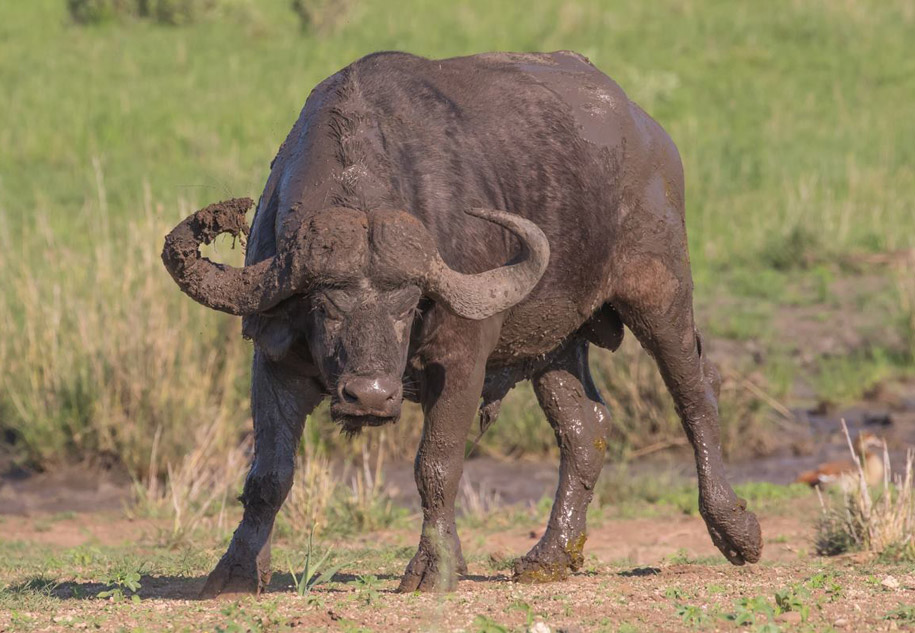 Kevin Costner’s epic movie Dances with wolves showed heart-breaking scenes of hundreds of dead bison on the prairie, slaughtered for their skins and tongues by the American frontiersmen. Later scenes showed the Sioux hunting them and how a young man nearly fell victim to a wounded bison. Lieutenant Dunbar dropped the beast a few feet in front of the young brave and saved him from being gored by the bison.

Though the North American bison is a very large bovid with quite a reputation, it has never gained the respect and admiration enjoyed by the African buffalo. Our local beast is a stunner by all means. It is bold, beautiful, powerful and dangerous to those that dare hunt it. Having never hunted buffalo, I cannot speak about the menace of the wounded buffalo, but I have eavesdropped on many occasions where victims related their buffalo ordeals with colourful language. On one occasion, a hunter opened a rifle case and presented a badly damaged 458 Winchester Magnum. Both hunter and rifle were mauled by a wounded buffalo bull.

What is so amazing about this murderous animal is that it can be very docile and tame when bred in captivity. Corridor disease and bovine tuberculosis have caused disease-free buffalo to be worth their weight in gold. Many landowners breed disease free buffalo in intensive breeding projects. I have visited a number of these facilities where the animals are kraaled like cattle. You can get real close to the buffalo and they appear to be relaxed, without the mean look normally found in their eyes. At one breeding centre my favourite red-billed oxpeckers were dotted all over the buffaloes, and were equally relaxed. The calves are like Brahman calves, playful and cuddly.

However I’ve also visited a farm in Thabazimbi where the landowner kept a wild bull in a sturdy enclosure. I went to the enclosure to study dung beetles and nearly met the bull head on when he charged the gum-pole fence. Man, that sent the adrenalin pumping! Coming across buffalo in the Kruger National Park is always a joy as the animals are in their natural habitat with their normal, bad temperament simmering underneath the surface. Cars are sometimes damaged by ill-mannered bulls. It’s best to steer away from bull herds especially if they are made up of the old dagga boys.

Don’t for one moment believe that only bulls are dangerous. Cows are also not too fond of people and will especially defend calves. There are recorded scenes of breeding herds killing lions. Buffaloes are powerful enough to toss a lion’s body several meters into the air with their horns. Some lions, however, learn the skills to successfully hunt buffalo. It is a fierce battle with some of the lions taking serious knocks from their prey. The joint effort of the pride eventually pays off when the buffalo is exhausted. One lion locks onto the buffalo’s nose to suffocate it and the others use their claws and jaws to deliver the final blow.

A large bull will reach close to 800 kg live weight – basically the same as an old eland bull, but there is obviously a huge difference in the temperaments of the animals. Bulls tend to hide in thick reed beds or bush where their excellent sense of smell and hearing gives them an advantage over their enemies. They mostly they take off when they sense danger, but once a bull has taken a bullet, the chapters in the book change. It is time to bid the family and friends farewell in case the wounded animal finds you before you can deliver a mortal shot.

Caliber choice? Well, the great hunters say a 375 is the minimum – that includes the Holland and Holland classic, the ultra magnums and the new 375 Ruger. The 9.3X62 has probably taken as many buffalo as the 375 H&H and in the right hands it is an excellent dangerous game cartridge. It is well- known that the late Jack Lott found a distinct dislike in the 458 Winchester Magnum after a buffalo he shot with it became unfriendly. This incident took Jack back to the design board where he invented the impressive 458 Lott. The 416 Rigby will also drop a buffalo with a good shot whilst professional hunters prescribe any of the 450s and larger as the best muti for buffalo. Whatever calibre the hunter uses, even a 600 Nitro, if is not skilfully utilised to render a good heart/lung or brain shot, his tale of woe and heroism will be published in some hunting magazine. Don’t mess with the boss!