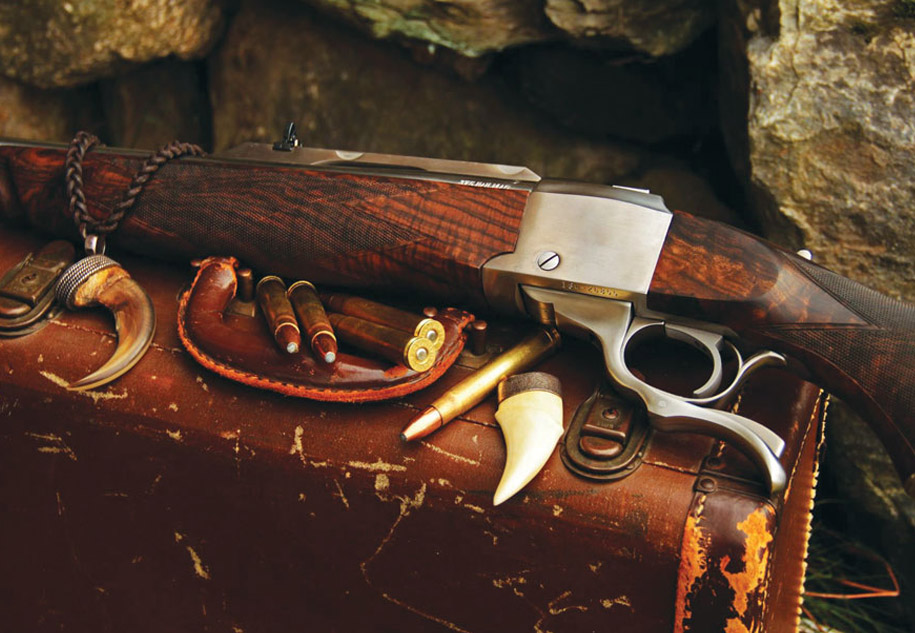 Action: The Gewehr 98 (M98) is a controlled feed bolt action rifle by Mauser (introduced in 1898) firing the 7.92x57mm Mauser cartridge from a 5-round internal clip loaded magazine. It was the German service rifle from 1898 to 1935, when it was replaced by the Karabiner 98kurz (Carbine 98 Short), a shorter weapon using the same basic design. These rifles were mass produced due to contracts for large numbers of military rifles for Germany and many other countries. At the outbreak of World War One in 1914, the German Army had approximately 2,300,000 Mauser 98-rifles of all types and an additional 7,000,000 were produced during the war.

Cartridge: When German gunmaker Otto Bock introduced the 9.3x62mm Mauser cartridge in 1905, he could not have known what an important influence this cartridge would have on hunters in Africa! The 9.3x62mm Mauser cartridge was designed to fit into the controlled-feed Mauser M98 bolt action described above. It fired a 286-grain bullet at a muzzle velocity of 2362 ft/s and in the Mauser rifles this effectively balanced power and recoil. European hunters and settlers in Africa often chose military rifles for their reliability and low cost, but colonial governments fearful of rebellions often banned military calibre rifles and ammunition. The 9.3×62mm was not a military cartridge and therefore never had this problem.

Rifle: The development of the 9.3x62mm Mauser cartridge in the Mauser M98 bolt action resulted in a cheap magazine rifle firing one of the best all-round hunting cartridges. The relatively high velocity (remember this was 1905) with the 286-grain bullet provided sufficient penetration and a flatter trajectory at ranges of up to 250m compared to its contemporaries. The advantages of the Mauser’s M98 action were recognised by British gunmakers such as Rigby and they purchased it for use in their own rifles with their own cartridges, underscoring the influence of these actions on especially hunting rifles. The 9.3x62mm Mauser rifles were far less expensive to acquire compared to the expensive British double rifles that did not benefit from mass production to the extent that the Mausers did. The low cost of the Mauser rifles coupled to the efficiency of the 9.3x62mm cartridge and the 286-grain bullet on thick skinned dangerous game soon caused German farmers in Africa and hunters from Europe to replace their doubles and other less powerful magazine rifles with the 9.3x62mm Mauser.

Competition for the 9.3x62mm Mauser: This trend did not go unnoticed by British rifle manufacturers and between 1909 and 1911 Holland & Holland, Jeffery, Rigby and Westley Richards introduced their own cartridges to find an alternative for the 9.3x62 mm Mauser in effort to stem the tide and keep their share of this market.

.375 H&H Magnum – the final product: Holland & Holland’s new cartridge launched in 1912 was named the 375 Holland and Holland Magnum, the cartridge featured a belt and fired a 300-grain bullet (which had the same sectional density as the 286-grain 9.3×62mm bullet) at a muzzle velocity of 2,500 ft/s. The cartridge burned cordite and had a rather low working pressure of 47,000 psi (3,200 bar) by modern standards resulting in spent cases extracting reliably in the tropical and hot environments of India and Africa.

The .375 H&H Magnum cartridge was a proprietary design unlike the 9.3×62mm and was considerably longer than its German counterpart. With a total length of 91.4 mm (as opposed to the 83.6mm for the 9.3x62mm), the cartridge is too long to use in a standard length action unless certain adjustments are made. Holland & Holland chose the rarer and more expensive magnum length Mauser action for their .375 H&H Mag. The .375 H&H Mag rifles initially available only from Holland & Holland was expensive and for quite a number of years this was a less attractive option in comparison to the 9.3×62mm Mauser if price was a consideration.

Important note: As mentioned before the 9.3x62mm Mauser cartridge was designed by Otto Bock to fit in the standard length Mauser M98 action. Standard length actions can be used for the longer .375 H&H Mag cartridge but this require careful adjustments (now the shorter action is adjusted to fit the cartridge) to ensure flawless operation. If a .375 H&H Mag is ordered to be built around a standard length action, make sure to employ the services of a knowledgeable gunsmith that did this successfully in the past. The following is a few examples of the adjustments to standard length action that need to be executed correctly/perfectly to prevent problems: the magazine has to be adjusted for the longer .375 H&H Mag cartridge to ensure the fit into and the smooth feeding of the cartridge from the magazine to the chamber. The extraction and ejection of the case or cartridge should be flawless. Any problem in this process preventing the quick feeding of the next cartridge into the chamber and firing the shot is unacceptable in any rifle, more so in a magazine rifle intended for dangerous game where a follow-up shot/shots may be needed to stop a charge at close quarters.

At the end of World War I, Holland & Holland released the .375 H&H Mag cartridge to the public for general trade. New markets opened in America as more hunters sought to hunt. In Africa and American rifle manufacturers started producing the .375 H&H Mag between WW1 and WW2, and Winchester introduced the Model 70 in .375 H&H Mag in 1937. During the WW2 era from 1939 to 1945, private individuals could not travel freely and hunting safaris to Africa came to a virtual standstill. The destruction of the Mauser factory at the end of WW2 also ended the production of, among others, the 9.3 x 62mm Mauser.

The end of World War II saw many gun makers turning to the civilian shooting market when war time contracts began running out. FN, Mauser, Remington and Winchester began turning out quality bolt-action rifles and with increasing numbers of sportsmen taking to Africa. The safari industry recovered during the late 1940s and early 1950s. The majority of clients were from the USA and hunting rifles in the .375 H&H Mag calibre became a common sight in Africa. The .375 H&H Mag with good quality bullets of appropriate weight and correct shot placement proved itself as an effective calibre that most hunters could use with ease to hunt dangerous game. Many professional hunters have the .375 H&H Mag on standby should a client's heavy calibre rifle give trouble during a hunt. According to professional hunters, clients often acquire heavy calibre rifles shortly before their hunting safari to Africa, which leave little time to get properly acquainted with their rifles. The result was that they frequently could not handle the rifle with confidence - with excessive recoil usually a problem – the result was that they could not shoot accurately.

My .375 H&H Mag BRNO hunting rifle with the ZKK602 magnum length action with a 1.75–5x20mm Tasco telescope. The only changes I had done to this factory rifle was to the wood at the back of the rifle stock to make it longer (the previous owner had it shortened), to change the “Bavarian” or “hogs back” type stock to the straight stock I prefer and the two crossbolts both sides of the magazine to reinforce the stock.

A further boost in popularity of the .375 H&H Mag came when African colonies enacted legislation stipulating a .375 calibre to be the minimum bullet diameter for dangerous game. The legislating away of sub minimum cartridges forced the users of these cartridges to turn to a cartridge which qualified for the shooting of these game species and the logical choice was to move up to the .375 H&H Magnum. One of the victims of this legislation was the 9.3x62mm Mauser which by the stroke of a pen overnight did not qualify for the shooting of dangerous game anymore! This was an injustice to a great calibre/cartridge that not only proved itself on dangerous game but a cartridge that guided the design of the .375 H&H Magnum cartridge to a large extend as described above.

Initially, bullets for the .375 H&H Mag were available in 235gr, 270gr en 300gr with original muzzle velocity of 2800, 2650 and 2550 ft/s respectively. Soon after the release of the 375 H&H Mag, satisfied hunters started giving feedback on the efficiency of this calibre. The penetration of good quality solid 300 grain bullets on for example elephants in particular and the flatter trajectory of the lighter bullets over long distances on other game contributed to establishing the 375 H & H Magnum as a very versatile hunting cartridge. With modern bullet weights ranging from 220 to 380 grains there is a wide choice with the necessary punch for small to medium game, as well as large, thick-skinned dangerous game. The most common bullet weight available in this calibre is 300-grains. African game guides, professional hunters, hunters and dangerous game cullers have repeatedly voted the .375 H&H as their clear preference for an all-round calibre if they could have only one rifle. Alaskan game guides where brown and polar bear occur have expressed a similar preference.

The hunter owes it to his prey to kill it with the first shot. Any professional hunter worth his salt always strive to get his client in the best possible position for an accurate first shot on an animal. When hunting dangerous game, the importance of shot placement is even more important because a wounded animal from especially the Big Five is a very dangerous opponent! That is why most professional hunters prefer a client using a calibre in the class of the .375 H&H Mag that he/she can handle well and use with confidence for accurate shot placement. On the other hand, it is with good reason that professional hunters usually choose a heavier calibre rifle such as the .458 Win Mag or bigger for personal use when accompanying clients. They are responsible for the safety of hunters (clients) especially when hunting dangerous game that might be wounded and they must be able to stop a charging animal at short range. As professionals they handle and shoot their personal rifles on a daily basis, it becomes a well used tool and therefore they tend to shoot them very well, especially under pressure.

It is now more than 100 years since the launch of the .375 H&H Mag and it is impossible to estimate how many rifles of this calibre are being used in Africa. It must be thousands that had been manufactured by numerous gun-makers worldwide. In South Africa where gun-owners experience a host of difficulties with the licensing of firearms in terms of the new firearms legislation (Act 60 of 2000), hunters think very carefully when choosing a new hunting rifle. Hunters who want to purchase a second or third hunting rifle might consider a heavier calibre for hunting buffalo or similar large game, but also suitable for the more common game species. The 375 H&H Mag is such a calibre. The ammunition is affordable, with manageable recoil to allow regular practice at the shooting range to ensure that you can effectively use your rifle and ammunition combination in all conditions. It is a suitable `heavy' calibre for the average South African hunter. Not bad for an `old man' of 109 (2021) years!