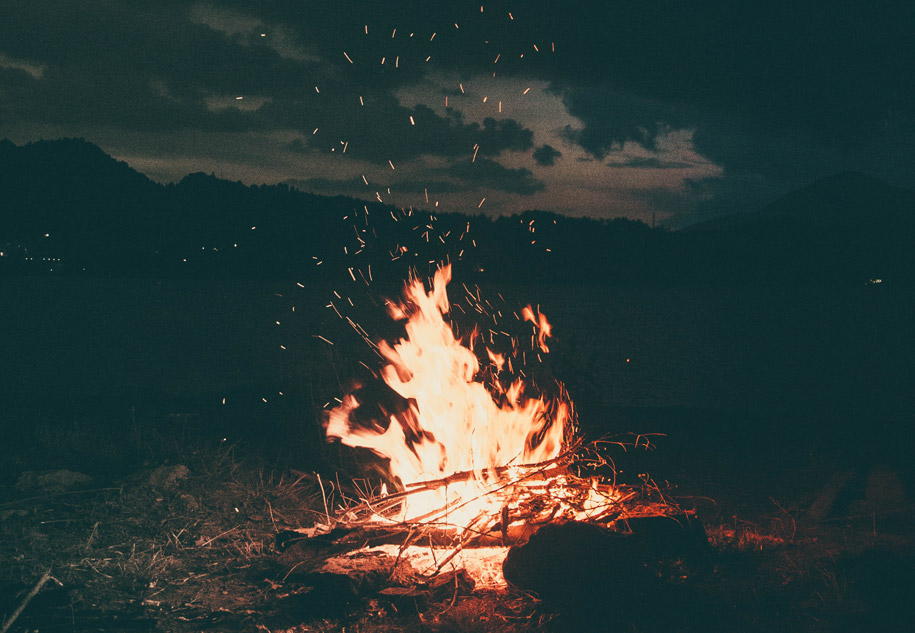 “No Dad, that's not how you told the story before!” my two daughters, Karlie and Anita would protest. My wife, Henna, would look on with amusement, enjoying our family's story time rituals.

Do families still make time to tell stories? I was very privileged to have had a father who often entertained us with stories. It was especially his hunting stories that fascinated me. It was one of those stories that taught me how dangerous a wounded gemsbuck can be. My father had learnt it from his father (Oupa Andries) who had demonstrated it to him during a hunting trip when Dad was a young boy. It was a valuable lesson that has often reminded me - just in time - that one had to respect wild animals and their ability to seriously hurt or kill you if you dare to misjudge them! He also told us of the times he and a friend went hunting in the Kalahari when they had to endure the extremely cold night temperatures in the dunes without the luxuries (a modern tent, sub-zero sleeping bags) that we enjoy on hunting trips today. The lessons in both cases was to respect nature and all its elements. You can get into serious trouble very quickly if you do not pay attention.

Although my wife and two daughters are not regular hunters, they love nature and accompany me on hunting trips. Before the daughters started school, we started camping and they became hooked on nature and loved my campfire stories. Whenever we sat around the fire, they asked to hear more stories. Of course, good stories were not unlimited, you either add new ones or with a bit of creativity an old story was often invigorated. It is during these occasions that I am often corrected when I dared to deviate from the original story. Today, both daughters are married to men who also hunt, giving a new life to hunting stories. Hunters or anglers do not need an invitation to tell their stories and Mark and Chris (the two new hunters in the family) are no exception. The addition of grandchildren added a new dimension since some of the stories from Oupie’s childhood sound like fairy tales (and some are!) to the grandchildren and they do not hesitate to express their disbelief, to the great amusement of especially the adults around the campfire.

When our family go hunting or camping, our most important rule is that television, radio or any other form of music, computers, tablets, or mobile phone are not allowed. These are all wonderful communication tools that allow access to information, but it does nothing to improve communication or conversation skills. It is important to make time for each other, especially the children. Storytime contributes to quality family time, teaches us something about our past and history, giving us a sense of belonging. It also encourages young people to value story-time and participate.

Hunting stories have a much wider application and possible audience. A number of years ago the Pretoria East branch of SA Hunters started the tradition of hunting stories at the April members’ meeting. We chose April on purpose as the hors d’oeuvre prior to the hunting season. With the first event in 2005, we invited Ron Thomson (a retired game warden, big game hunter and professional hunter with vast experience) as our guest speaker and to share his big game hunting experiences with the members. We gathered at Rietvlei Nature Reserve outside Pretoria, with its large lapa and braai facilities. It was a beautiful but very cold autumn evening with clear skies and roaring campfire flames licking into the dark, cold air.

The enormous lapa has a big fire-pit in the centre surrounded by seating and smaller fireplaces where the audience gathered in small groups. The fires provided atmosphere and comfort while hot soup and sherry were served – or something stronger to keep out the cold.

Ron focused on his Big 5 hunting experiences and for the next 2 ½ hours everyone was entertained on hunting stories that most of us can only dream about. That is the essence of stories – it creates the opportunity to dream! The success of that evening led to a regular feature on the Pretoria East branch’s annual calendar.

Young and old can all benefit hugely from stories. Hunting stories are an even more powerful medium when used in the right context around a cosy campfire in the company of your favourite people. However, a hunting story that turns into a bragging session soon loses its appeal and audience. Many nations with hunting cultures, such as the Eskimo, San (Bushmen) and Voortrekkers transferred knowledge successfully from one generation to the next with stories.

When your children start telling you that you are wrong, you realize that your parents were right all the time! An interesting example was a recent discussion with my granddaughter, Kaylee (13 years old) who remarked that she does not understand the value of the subject of History at school. I explained that History like any other story based on facts contain lessons that we can learn from. I further explained that History teach us to better understand the world, its people and change in general. I could see that I did not really convince her but I trust that she will at least think about our conversation.