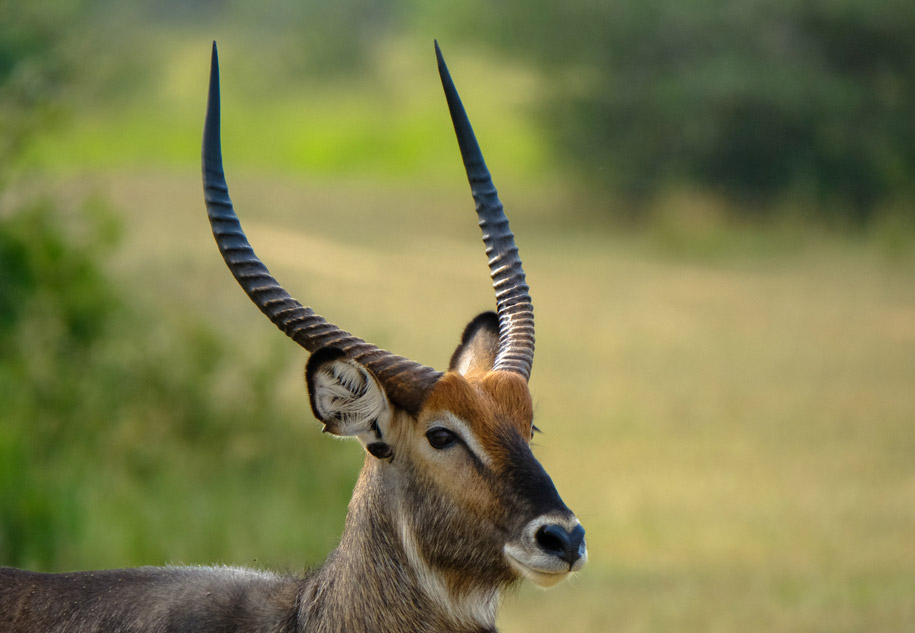 The ordinary waterbuck (Kobus ellipsiprymnus) occurs in a vertical strip ranging from south of the horn of Africa, Kenia, Tanzania, Mozambique and South Africa, and towards the west in the Caprivi Strip of Namibia, and in southern Zimbabwe, the Limpopo Province of South Africa and western Botswana. The ordinary waterbuck is characterised by a white elliptical ring on the rump, which gave it its descriptive Afrikaans name of kringgat.

Many hunters regard the kringgat waterbuck as a trophy animal (only the bull has horns) and it is seldom hunted for its meat. Over many years, several reasons had been given for the views that waterbuck meat is inedible, i.e., the meat smells offensive and nothing can be done about it.

Experienced hunters have discovered that it is the skin and hair of the Waterbuck that give off an unpleasant oily smell which affects the meat. As long as you ensure that the outside of the skin and hair do not come into contact with the meat during the skinning process, the meat is indeed edible and even tasty.

During the winter of 2011, I shot a young waterbuck cow near Stockpoort in Limpopo province. It was a heart shot from the front. The buck ran for about 50m and was dead by the time I reached her. It was my first waterbuck and I wanted to be extra careful when skinning it. I stood by and assisted during the entire process. The two workers washed their hands in mild soapy water before starting with the skinning. The one worker only held the outside of skin (he never touched the meat) while the other worker proceeded with the skinning, without touching the outside of the skin. If any accidental touching of the skin occurred, he rinsed his hands off in the soapy water before proceeding. Before carrying the carcass into the cool room, we all washed our hands thoroughly.

My family and I used most of this meat for tasty main dishes and even used some of it to braai. My wife enjoys game meat, but she does not like the `wild' taste of it. She particularly enjoys the waterbuck meat, which tastes similar to the meat of a kudu cow, which is our staple meat dish.

In Man MAGNUM of April 2000, Gregor Woods wrote about a trophy waterbuck bull that he shot. He followed a similar skinning process, but went even further by cutting off the legs at the knees (to get rid of the glands) immediately after the buck had been killed. He had a good result and enjoyed the meat.

A waterbuck must be treated with utmost care during the skinning process and when handling the carcass to ensure that the meat is edible. If hunters want to use the meat of waterbuck, do not assume that your regular skinner will know how to deal with it. Because there are so many misunderstandings about waterbuck meat, very few skinners will know how to handle it properly. Supervise the skinning of your waterbuck personally and follow the rules explained above.
The common principle as far as all types of meat is concerned, is that the meat of younger animals is tastier than older animals and especially older male animals. Yes, you can use the meat of the trophy waterbuck bull if you follow the tip given by Gregor Woods.