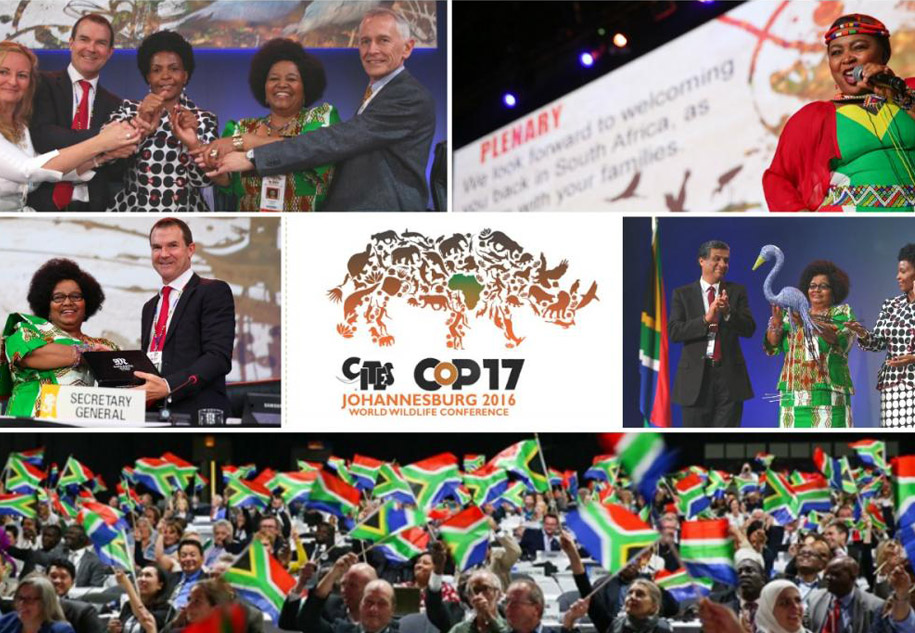 The Convention on International Trade in Endangered Species of Wild Fauna and Flora (CITES) is an international agreement between governments to ensure that international trade in specimens of wild animals and plants does not threaten their survival. South Africa hosted the 17th international conference of parties (COP17) in Johannesburg at the International Convention Centre from 24 September to 5 October this year. It was the largest gathering of CITES in its 43 year history with the participation of 152 governments and more than 3,500 people. Over 500 species were affected by decisions taken on 62 proposals that various member states tabled at COP17. 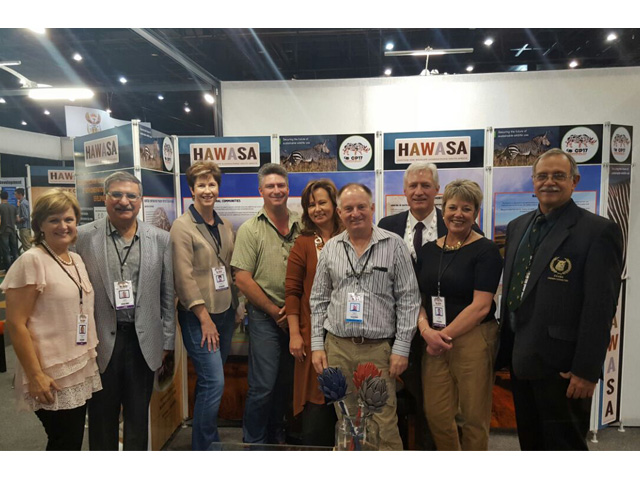 The South African Hunters and Game Conservation Association (SA Hunters) represents citizen hunters for whom hunting is part of their culture and a way to obtain healthy “free range” meat as an alternative protein source. Therefore, trade restrictions imposed by CITES do not directly affect members. However, decisions by CITES affect poaching and trafficking, sustainable use of wildlife and community beneficiation, which are all aspects that are very important to SA Hunters as a conservation organisation. It is the Association's (SA Hunters') primary objectives to secure wildlife areas that contribute to conservation and responsible, socio-economic development. The management of SA Hunters actively engaged in CITES COP17 and commented on various CITES' proposals. SA Hunters also collaborated with other organisations in the wildlife sector to convey the conservation success stories of the wildlife sector through exhibitions, presentations and participation at CITES events.

During a side-event chaired by the Minister of Environmental Affairs, Dr. Edna Molewa, SA Hunters presented its groundbreaking work in establishing biodiversity economy nodes as a strategy to accelerate socio-economic development in rural areas, using wildlife as a key driver. CITES' decision to down-list the Cape Mountain Zebra from Appendix I to Appendix II because it no longer met the biological criteria for inclusion in Appendix I, further demonstrated the successful conservation efforts by South Africa and the wildlife sector.

Sustainable use and threatened species
From the onset, in President Zuma’s opening speech, South Africa was clear about the important role that sustainable use of healthy wildlife populations, including use through responsible hunting, can and does play in both conservation and socio-economic development in the country. The organised wildlife sector of South Africa, represented by the Hunting and Wildlife Associations of South Africa (HAWASA) and the Department of Environmental Affairs (DEA) provided a united front in advocating and demonstrating that sustainable use of wildlife resources can contribute to conservation and simultaneously, lead and stimulate development, and improve the well-being of our people.

The pro-sustainable use agenda was supported by most of the countries in southern Africa. It led to robust debate with countries that have different conservation models and where animal rights groups often funded conservation programmes. This included some of the countries to the north in Africa, which form part of the range state of species such as the African elephant, but where there is a trend towards a more preservationist approach due to the steep declines in numbers of wildlife populations.

SA Hunters supported South Africa’s positions that acknowledged that there might be a need for trade restrictions in those countries, but that it should not result in trade restrictions in pro-sustainable use countries to the south, such as in South Africa, where populations are thriving. The Association welcomed CITES' rejection to up-list thriving elephant populations in Zimbabwe, Namibia, Botswana and South Africa to Appendix I because our elephant populations did not meet the criteria for up-listing. For example, as an Appendix II listed species, import, export and re-export of elephant is controlled through a permit system. With the threat from poaching and illegal trafficking in elephant ivory, a control system is required. Elephant populations in the above-mentioned countries are not currently threatened with extinction and trade does not have a significant negative impact on survival of the populations. Therefore, up-listing to Appendix I that prohibits commercial trade cannot be supported.

Botswana, which has one third of the entire continent’s elephant population, supported the up-listing of elephants to Appendix I, arguing concern about the impact of increased poaching in the country that amounted to a loss of 20,000 elephants over a period of five years. However, the EU with 28 votes opposed the proposed up-listing and argued that elephant populations in southern Africa were well-managed and did not meet the required criteria of a 50% decline over three generations. This evidence-based decision by the EU contributed to the rejection of the proposal, even though countries in over 80% of the elephant range voted against trade. This decision highlighted the importance of.. fact based decision-making and the notion that different populations of a species, especially those over vast areas, should be evaluated separately because some populations may be doing extremely well even if the numbers of the species over its entire range might be declining. South Africa and Namibia are extremely successful in managing their wildlife populations through sustainable use policies and should not be held at ransom by those countries whose preservationist approach limits their success. 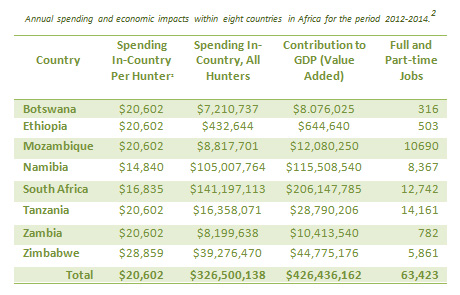 If the proposal had been adopted, the trade restrictions under Appendix I would have resulted in a significant loss of potential income to governments, conservation organisations and communities that manage and utilise viable populations under their respective countries’ sustainable utilization policies. It would have further exacerbated the ecological implications of over-population of elephants in certain areas where, if elephant numbers are not reduced, habitat destruction can result in significant losses in many other wildlife species. Legal hunting as a management tool has effectively been eliminated in Botswana in the beginning of 2014, discarding its potential contribution to conservation of wildlife areas, food security and socio-economic benefits to marginalised rural communities.

Hunting
As part of an ecosystems management approach, responsible hunting and the exporting of hunting trophies provide important incentives for managing wildlife areas and generates jobs in rural areas where other economic activities may be limited, especially in dryland ecosystems. Parties at CITES COP17 formally recognized this role and agreed that attaching economic value to wildlife and its responsible utilisation through hunting, can contribute to species conservation and community livelihoods.

However, hunting must be done responsibly. In 2015, SA Hunters initiated a process to develop standards and a certification system that will promote responsible wildlife management and hunting in South Africa. Therefore, the Association fully supports the CITES resolution that recommends that countries develop and comply with certain standards and procedures with regard to hunting trophies. The resolution further recommends that the issuing of export and import permits for hunting trophies of CITES-listed species should be guided by the contribution of the hunting activity to conservation.

The implications of the divergent views on the management of elephant populations and control of poaching and illicit trafficking in illegal ivory are exacerbated by the fact that there is no integrated elephant management plan between South Africa and neighbouring countries such as Botswana. However, all parties at CITES agreed to an Ivory Action Plan to address a series of aspects that facilitates illegal trade.

Resolutions
The following resolutions are worth mentioning:

Going forward
Going forward, CITES should carefully consider the unintended consequences of certain policy approaches. CITES is a trade convention and currently running the danger of providing perverse incentives that promote captive breeding of threatened species as opposed to supporting responsible, sustainable and well regulated harvesting and trade of wild populations that can provide incentives for strategic conservation of species in their natural environment. CITES should further consider the implications of decisions on communities living with and depending on wildlife for their survival and continued well-being. It is internationally recognised that community-based natural resource management fosters sustainability in conservation and can play a major role in reducing illegal use and trade in wildlife. It fosters a culture of stewardship where people take ownership of managing their wildlife, generating income and stimulating local economies. This is particularly true in Africa for species such as the African elephant and lion, which might be perceived by local people as undesirable intruders that compete for livelihoods and pose a direct lethal threat to them. It was acknowledged at CITES COP17 that ex-situ production (preservation of components of biological diversity outside their natural habitats e.g. captive breeding) might lead to loss of revenues for rural communities and that positive incentives to promote in situ conservation and sustainable use might benefit wildlife and communities.

In conclusion, SA Hunters congratulates the Minister of Environmental Affairs and her team for hosting a successful CITES COP17. DEA, together with the wildlife sector and several of our southern African neighbours, successfully advocated CITES as the mechanism for regulating trade and not stopping it. In Minister Molewa’s own words: “A clear message was sent that responsible conservation management goes together with sustainable use and beneficiation and those that do well, will be rewarded.”

1. A summary of elephant population trends as included in various reports presented at CITES COP 17, including a presentation by the True Green Alliance, supported by the wildlife sector of SA.
2. Southwick Associates. 2015. The economic contributions of hunting-related tourism in eastern and southern Africa. A study commissioned by SCI.